For small lithium batteries, there are three standards that our Battery Lab tests to most often:

Following is a quick overview of each one.

UN/DOT 38.3
Want to ship a lithium battery almost anywhere in the world by air, vessel, rail, or truck?  Unless you want to be extremely restricted in your options for transporting your batteries (ground transport as Class 9 Hazardous Goods), you will need to certify that your batteries have passed UN/DOT 38.3.

Found in many countries’ shipment of dangerous goods regulations, this standard is relevant for the transportation safety of all lithium metal and lithium ion cells and batteries

UN/DOT 38.3 is a self-certify standard but because of potential liability issues, most companies choose to use a third party test lab like MET Labs.

Some tests are easier to pass than others.  The altitude test is the easiest. The vibration test, on the other hand, is intense and long-running: 3 hours in each of the three cardinal planes.  And the T1-T5 sequence typically has a negative cumulative effect.

IEC 62133
Mandated by many IEC end-device standards, IEC 62133 is the de facto standard for international compliance.  UN 38.3 transportation testing (see previous section) is an integral requirement, but does not need to be repeated.

Compared to the requirements of UN 38.3, these tests are relatively easy to pass.

UL 2054
Compliance with the requirements of UL 2054 is mandated by a number of U.S. end device standards. It is a challenging standard involving roughly double the number of tests found in the UN or IEC requirements:

With the inclusion of single faults and worst-case operation, the electrical tests are the most challenging.  The abusive overcharge test is the most difficult given the overvoltage conditions applied to the faulted pack.  Abnormal charge, forced discharge, and two short circuit tests also involve significant risk of failure.

For lithium batteries, UL 2054 defers all component cell level testing to UL 1642.  Warning: Not all labs will accept another NRTL’s test results. For example, when testing a battery to UL 2054, MET Labs will accept another NRTL’s cell level UL 1642 test data and apply it to the UL 2054 testing. This saves the client time and money. We recommend avoiding NRTLs that don’t follow this client-friendly practice.

The future of UL 2054 is cloudy. UL has released the first edition of UL 62133, which is fully harmonized with IEC 62133, 2nd Edition. UL 2054 and UL 62133 essentially compete for the same test space although their requirements are quite different. The timing of UL 62133 adoption is still unfolding, but it is expected to have an impact on the future role of UL 2054 as an important U.S. compliance standard.

In addition to these three standards, MET is increasingly seeing a demand for testing to IEEE 1625 and 1725 for CTIA battery certification.  MET is a CTIA Authorized Test Lab that offers full scope CTIA-accredited battery testing and certification services for these standards.

Not sure what standard applies to your batteries?  Contact us for quick and easy answers.

About Compliance Today | By MET Labs

Through our educational resources, we keep you informed on essential regulatory requirements, changes, updates, and notices on a wide range of subjects across multiple industries, topics, and trends.Have a question about Standards Interpretations, Technical Specs, Applicability of Standards, Country-Specific Requirements? Subscribe to Compliance Today by MET Labs.

Need guidance or have an upcoming need for Battery Testing?

Schedule a call › Get a quote now ›

Subscribe for the latest news, industry trends, and insights into Battery compliance. 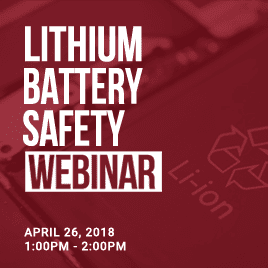