MET Labs is proficient in performing the conditioning test portion of NIJ Standard 0101.06 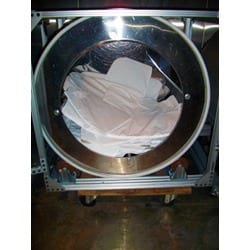 Ballistic Resistance of Body Armor. MET contracts directly with soft and hard body armor manufacturers for this service, or serves as a sub-contractor to other ballistics labs.

NIJ Standard 0101.06 tests for the effects of environmental conditioning from water, long-term use, and temperature exposure on soft (Levels II-A, II, & IIIA) and hard (Levels III & IV) body armor. These tests put one batch of eight panels (six large and two small) into a rotary tumbler set at 149°F with 80% relative humidity. This batch is cycled for 72,000 cycles at five revolutions per minute over a period of roughly ten days, then removed and tested against both threat calibers at a reduced test velocity.

Get a Quote for Body Armor Testing